Here is something tailor made for these stay at home, quarantine, social distancing days. It is a new PBS program entitled Dishing with Julia Child. Simply calling it delightful doesn’t do it justice.

There are six episodes in the series. My local PBS station, PBS SoCal, is airing them in batches of two each Friday evening. If your PBS station isn’t showing the series it is available through your cable provider’s on demand service, or via streaming for PBS Passport and Amazon Prime members. In each episode professional chefs watch an episode of The French Chef and comment on it.

I DVR’d the first two episodes and mistakenly watched the second episode first. In that episode Julia shows how to bake bread. Sara Moulton and Carla Hall comment together, as do Marcus Samuelsson and Vivian Howard. They note how Julia loves butter, sneaks in tangentially-related cooking techniques, and provides alternate methods for doing a given task in the kitchen. In the first episode, which I watched second, Julia demonstrates preparing fish while José Andres and Eric Ripert point out how the camera started and just kept running. The program was not edited; if Julia made a mistake she recovered and went on.

If you’re looking for something to put a smile on your face in these bleak days Dishing with Julia will do it.

I wrote here not long ago about cutting back on our streaming subscriptions. I dropped Hulu and CBS All Access. That was just before we were all told to stay home except for grocery shopping and medical appointments.

And, of course, the library is closed so that cuts off a source of DVDs for Terry. She asked me to subscribe to Acorn to which I agreed when I saw their thirty day free trial and their very attractive annual rate. (For BritBox fans, I have read that Acorn has a larger selection of shows, both BBC and ITV, and they stream the Lucy Lawless series, My Life is Murder, in which she plays a detective in England, something that Terry wanted to see.)

Given current circumstances I had to rethink dropping Hulu. They do have a great selection: Xena (speaking of Lucy Lawless), seventies comedies such as The Mary Tyler Moore Show and Bob Newhart, quirky series such as The Mindy Project, and originals like the new favorably reviewed mini-series Little Fires Everywhere. So, sipping a Scotch and Crystal Geyser (my standard weeknight drink) on a recent evening I reinstated my subscription. And bless their technological hearts, everything I had stored in the My Stuff section was there and preserved for me. Thank you, Hulu.

So in the words of the marvelous Miss Emily Litella, “Neevvverrr Mind!”

We knew that we both had surgeries coming up: Terry with her knee replacement surgery in October 2018 and me with my gastrointestinal surgery that ultimately happened in February of last year. We added Hulu as a streaming service and bought a second Roku device for the bedroom. After my surgery and then my setback, which meant a second stay in the hospital, I added CuriosityStream.

As it turned out, neither of us watched a whole lot of streaming video during our respective recoveries. Star Trek: Discovery was a disappointment, as was the first episode of the much-anticipated Star Trek: Picard earlier this year. After some initial streaming of programs like The Mindy Project and WKRP, I rarely watched anything on Hulu, and in spite of its quality content I watched very little on CuriosityStream.

So this month we did the opposite of cord-cutting. We did some stream-narrowing. I cancelled Hulu and CBS All Access. I also cancelled CuriosityStream, but reinstated it when I got an offer for an absurdly low annual rate. That leaves us with Netflix and Amazon Prime Video along with some free services, including PBS and AllArts, which is pretty darn cool.

That will nearly cover the difference in our higher cable bill as our promotional period comes to an end.

I wrote last year that Terry and I had given up on Star Trek: Discovery. We found it too gloomy and dark, focused on war and violence. It was the antithesis of what Star Trek should be.

After the first season ended we began reading about the plan for season two. The producers decided to give up on the war motif and focus on exploration interpersonal relationships. We were hopeful and when season two started in January I re-started our CBS All Access subscription.

After watching the first few episodes, we have not been disappointed. The second season is about exploration, the relationship between science and belief, and the interaction between the characters.

I wrote a while back about buying a second Roku for the bedroom so I could watch streaming programs while Terry was watching something else in the living room. I mentioned that the television in the bedroom is an inexpensive not-smart TV with only two HDMI ports. Since one port is connected to the cable box I had to disconnect the Blu-Ray to connect the Roku. 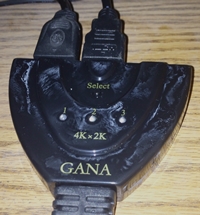 I didn’t like the idea of the Blu-Ray being disabled, however, and I thought that since there are USB hubs for computers there must be HDMI hubs for televisions. There are. And they’re not that expensive. The HDMI switch I found on Amazon was $9.98 and using my Amazon VISA points the device cost me $1.63.

That means I just punch the button on the HDMI switch to toggle between the Roku and the Blu-Ray.

How cool is that?

I wrote recently about how much we like our Roku device and how much use we get out of it. But it is attached to a single television – the one in the living room. When Terry is watching one of her shows I would head into the bedroom and watch a show on Netflix or Hulu using the Blu-ray player. But that device is awkward and clumsy to use and didn’t show my full watch list for those services.

A Roku Express is not that expensive, so I decided to get one for the bedroom. It meant disconnecting the Blu-ray, as our cheap bedroom flat screen only has two HDMI ports (the other one being connected to cable) but it’s a fair trade-off. When Terry is watching her DVR’d Supergirl or Black Lightning I have familiar and easy access to my Netflix programs in the bedroom.

the value of our Roku

About a year ago I wrote that I had bought a Roku device so we could get the CBS All Access streaming service in order to watch Star Trek: Discovery. That series, the first season at least, was an absolute disaster, so bad that I cancelled CBS All Access before the end of the season. (We are hoping for a better season 2 and expect to re-up in January.)

The Roku has been great for other reasons, however. It gives us simple, easy access to Netflix and Hulu. We get access to streaming movies through Fandango, Vudu, and Redbox.

The Roku also provides access to the CBSN streaming news service. I have been watching more news since the democrats won the House of Representatives, and I watch CNN and MSNBC, both of which show a bias against that guy with the orange hair who lives in the White House. That is more than fine with me, but it’s nice to have CBSN for their more down the middle approach.

Then there’s NASA TV. With the excitement around the Mars InSight mission I thought perhaps Roku might offer NASA TV. In fact, they do. How very cool is that?

The Roku was an inexpensive purchase. We are getting more than our money’s worth.