I haven’t discussed it for a while, but those of you who have been reading this blog for a long time know that I’m really a 1970s kind of guy. I have more of a nostalgia for the seventies than for the eighties and I much prefer seventies music to eighties music. The default radio station on my SiriusXM car radio is The Bridge, which plays music of James Taylor, Carly Simon, Gordon Lightfoot and the like.

That seventies vibe informs my Saturday morning routine. While waiting to hear from my brother or sister-in-law as to where Terry and I going to have breakfast with them, my dad, nephew, and great niece I have my internet radio on the Sirius XM channel 70 on 7, which plays reruns of Casey Kasem’s American Top 40 from the 70s. When we get in the car I switch over to 70s on 7.

I look at the date on the display and remember where I was and what I was doing at the time. Some of the songs were not part of my world then, but many bring back memories.

when box boys were great

Not long ago I checked in on Facebook at my local supermarket and made the following comment:

Checkers and baggers don’t know how to properly fill a bag anymore. By gum, when I was a box boy we knew how to do it right, dag nab it!

I was surprised by the number of reactions I got. But it’s a sore point for me. I have some history there.

I was a box boy in high school. I first worked at Village Market, one of three stores owned by the Goodwin family of Crestline up in the San Bernardino mountains. I  then worked at the chain store Alpha Beta, which I enjoyed. There were several of us Hemet High seniors who worked there and we took pride in what we did. We developed a rhythm of keeping one hand in the bag to place the item while filling the bag with the other. Of course this was when we used paper bags. That technique was not possible with the advent of the single-use plastic grocery bag. Fortunately the voters in California last year voted to ban those single-use bags.

That means that people bring their own bags of different shapes and sizes, which, as one commenter suggested, is perhaps confusing the staff. But as I replied, “Put me at the end of a checkstand and I’ll fill each bag properly, no matter its shape or size.”

How hard can it be? Neither checker nor bagger seems to understand that if you put the milk and juice in first the other stuff will fit around it. But it’s easier for them to leave those items out of the bag. Over at Sprouts they have the same problem. They don’t understand how to position my frozen entrees so that everything else fits in the bag as well. sigh (Although I have to say that the fellow at Sprouts on Sunday did a really good job. I was impressed. I wish that was the rule and not the exception.)

I have long been a “forever in blue jeans” kind of guy. I haven’t always worn blue jeans, but somewhere along the line I started wearing them and have done so for many decades. 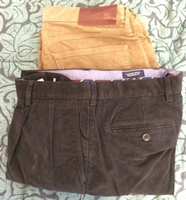 I did not wear blue jeans during my Claremont cockroach days. I certainly did not have a lot of money for new clothes then. I did not have a lot of money, period. But one of my Claremont friends turned me on to a hole-in-the-wall clothing outlet store where I found a pair of corduroys at a really good price. They were my favorite pair of non-work, casual trousers until I wore them absolutely threadbare.

That was in the mid-1970’s. I haven’t owned a pair of corduroys since. Until now. I reinstated my Lands End account online to order a pair of slacks for church, since the pair I had been wearing were seriously falling apart. I got an email from them that offered fifty percent off a regularly priced item. And they tantalizingly featured cords in that same email.

I ordered one pair half off full price and another heavily discounted, apparently on close out. So now I have two new pair of corduroy.  Terry loves them and I am really enjoying my soft, comfortable corduroys for the first time since 1975 or so.

it wasn’t when I thought

I discovered Pot Shots when I first arrived in Claremont in the fall of 1971. Maybe I even discovered them when I attended the summer program there in 1970. Pot Shots are post cards containing an aphorism and a line drawing.

A while back GoComics on the web started offering Pot Shots on a daily basis. They started at the beginning in the late 1960s and moved forward one Pot Shot at a time. I tracked my own experience at Pitzer College in the seventies as I saw each entry.

When 1975 rolled around I thought I had pretty much stopped paying attention to Pot Shots. That was my second semester as a senior at Pitzer and I was looking ahead to the next phase of my life. Then this Pot Shot show up on GoComics. Oh yeah. I remember that one. I remember it well. It resonated deeply with me.

Obviously, I was still an active Pot Shots follower in 1975.

I wrote last week about literary smackdowns, and I mentioned Dick Cavett. That made me think to look to see if he has a presence on Facebook. He does. And he was posting about rebroadcasts of his show airing on a network called Decades. Hadn’t heard of that. Turns out that it is a secondary digital channel broadcast on CBS-owned stations. And my television provider offers it.

What a delight. Programs air Monday through Friday. Decades offers shows from Cavett’s ABC program from the early 1970’s, his PBS program from the late seventies and early eighties, and his short-lived series on the USA Network from 1985. Now I admit that I have three box sets on DVD from the ABC show and I haven’t watched all the programs, but how convenient to have the programs right there on my DVR.

As someone with a permanent 1970’s mentality, this is a real treat.

There is a column each week in the Sunday New York Times Book Review called “By the Book.” Each week a different author is interviewed with a more or less standard set of questions. Here is an exchange from a recent interview with author Daniel Silva:

You’re organizing a literary dinner party. Which three writers, dead or alive, do you invite?

Gore Vidal and Norman Mailer, with William F. Buckley to serve as referee. I think I would set the table with paper plates and plastic utensils to avoid any undue bloodshed.

I posted this to Facebook and commented, “Can we somehow involve Dick Cavett in this as well?” After I wrote this I realized that Cavett had both Mailer and Vidal on his weeknight half hour PBS program in the mid and late 1970s. I don’t recall Buckley ever being on the show, but this was when Buckley was ascendant with his own weekend program in which he engaged in an intellectual smackdown with whomever his guest might be.

In fact, if I recall correctly, Cavett once had Mailer and Vidal together on the same episode, and there was something of a smackdown on that show.

There was some marvelous television in the 1970’s.

I received a fresh copy of the Pitzer College alumni magazine, The Participant, last week. It contained a piece about the retirement of a professor who arrived at Pitzer ten years after my graduation.

How could that be possible?

I graduated from Pitzer in 1975. I would have attended my 40th year reunion last year with my friends Laurie and Ron had Terry and I not been right smack dab in the middle of our move from Silicon Valley to the eastern reaches of the Inland Empire.

This woman joined Pitzer in 1985 and retired last year. That’s thirty years. By any standards I guess that is a career.

The math works out. But I do not like the math.