Remember those television commercials several years ago for Bella Sera Pinot Grigio? The couple who picked up the bottle found themselves on the terrace of a beautiful seaside villa overlooking the Mediterranean at sunset. That commercial is in part responsible for the fact that when we buy wine for our getaways one bottle is almost always Bella Sera. Such was the case when we had our anniversary getaway to Monterey last week.

Wednesday evening, however, we came about as close as possible to that scene from the Bella Sera commercial while remaining in California.

It was a first-rate twentieth anniversary getaway. 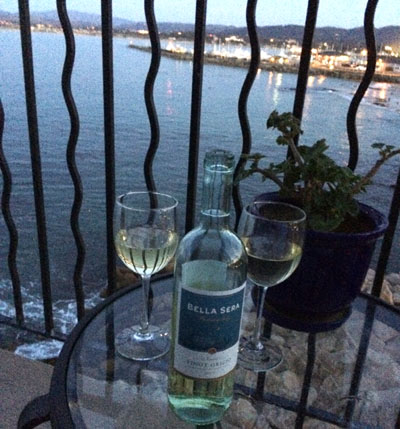 Terry and I spent two nights in Carmel last weekend. We’ve stayed other places in the Monterey Bay area, but never in Carmel proper. We were at the Sea View Inn, a marvelous little B&B between the village and the ocean.

We’re about an hour from the Monterey Peninsula, so I appreciated it that when I called to make reservations the innkeeper referred to us as local. She reiterated that when we arrived. What surprised me though was that the person who helped us at the hat shop in town said the same thing. Terry was looking for a fedora to go with her rain coat and found exactly what she was looking for. The shopkeeper gave us a 20% discount. 10% for being local and 10% for our anniversary. How nice is that?

The village is pleasant and fun to walk, though some of the stores and restaurants may be a tad pricy and pretentious. But except for the far West and East ends of town all of the parking is parallel. I don’t do parallel.

We took the 17 mile drive. I didn’t know that it was on the private property of the Pebble Beach resort, and that the cost is $9.75 to make the loop. Nor did I know that that is where the famous Lone Cypress is. But it was a marvelous drive with some spectacular coastline to enjoy.

Time at the ocean is always a good thing. 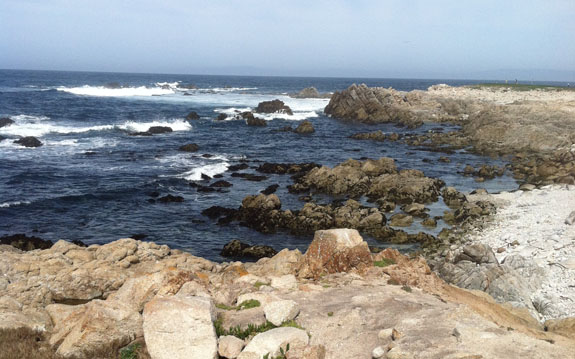