When we stay in Cambria we make a point of eating at the Sea Chest restaurant. I’ve written about it before, but not since I’ve been here at WordPress, I don’t believe. We’ve been dining there for as long as we’ve been staying in Cambria.

It has been around forever. It’s in an old building that overlooks the ocean. They don’t take 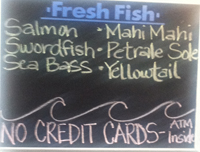 reservations, and they don’t take credit cards, so I always make a point of making an ATM withdrawal just for our Sea Chest dinner.

They open at 5:30 p.m. That means you want to be there standing in line by 5:10 p.m. One of the nice things about that is that you often get to have a conversation with the folks ahead of you or behind you in line. Last week we chatted with the couple in front of us. They must have been close to our age and were from Chicago. They were making a West Coast tour to celebrate their engagement. They had been told about the Sea Chest, and knew the rules about getting in line and no credit cards. 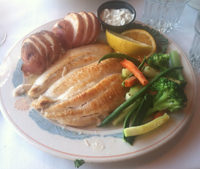 The doors open promptly at 5:30 and seating is very quick after that. The service is quality, though not necessarily prompt, given so many people being seated all at once. But the view is gorgeous and the food superb.

Terry had the Cioppino and I had the Petrale Sole. Rather than traditional tartar

sauce, they served a mixture of sour cream (I believe), tarragon, and dill. I don’t like tartar sauce, and usually only add lemon to my fish, but this was marvelous. The roasted potatoes are even better with the Cavender’s Greek seasoning, which they have at each table.

It’s good that we walk there, so we have the chance to burn off some calories on the way home.

The tides are in our veins, we still mirror the stars…
—Robinson Jeffers

Terry and I don’t remember when we first visited Cambria. We agree that it has to be more than ten years ago. On our first visit we chose a motel more or less at random. It wasn’t the greatest choice. It’s not that it wasn’t a nice place, by any means. It’s just that the room was decorated with antiques and there was a sign saying, “Please do not sit on our beautiful antique bedspreads.” Say what?

The place was run by a husband and wife. The wife ran the front desk, and she was not terribly well-informed. We asked her about the Sea Chest restaurant two doors down. She said that they don’t take reservations and that you “just walk in.” She was right about the reservations part, but as for just walking in, it turns out that there is a long line when they open their doors at 5:30. It’s a place we’ve come to love, though, and much more about the Sea Chest on Wednesday.

We also asked the innkeeper about the trolleys that went into town. She said that there was no schedule, that you “just stand there and wait.” In our wanderings we discovered the White Water Inn, where there was a trolley schedule posted on the bulletin board and the innkeeper was well-informed. That is where we have stayed every visit since then. Innkeepers have changed over the years, but they have remained friendly and well-informed. We always stay in a room with a fireplace and Jacuzzi tub. Moonstone Beach is just steps away, across Moonstone Beach Drive.

One of the marvelous things about Cambria is that it changes little. The wine shop (more on that tomorrow) I believe has changed owners. The White Water Inn now has DVD players rather than VHS players, the TVs are now flat screen, and they provide wireless Internet access.

But in general the Cambria we visited all those many years ago is the same Cambria that we visited last week. It’s a marvelous place to relax, get away, and recharge.

And to make that primal connection with the ocean and the tides.